"The storming of Dun Lethglaiss 496"

The story of the Journey North of the the Dál Fiatach begins with three Righ Uladh. The first was Muiredach Muinderg (died 489) who was was a king of Uladh from the Dál Fiatach. He was the son of Forggo mac Dalláin and his sobriquet means red-necked. The other two were his sons Eochaid (died 509) and Cairell (died 532).

After the fall Emain Macha to the likely nine tribes of the Airgíalla around 450 AD, the Dál Fiatach were driven out. The Airgíalla occupied the present Armagh, Monaghan, and Fermanagh, so the west was cut off. To the north was Loch Neagh and to the east were the hostile Cruithin. So Muiredach and the Dál Fiatach went south, down through Na Doirse 'The Gates' of Emain Macha, called the Dorsey near Sleieve Gullion. After passing Dorsey, they were in the 'Plain of Muirtheimne' in north Louth and sought the ridges of Breagha in south Louth for safety.

Saint Patrick first landed in Ireland at Saul in the County Down which is the closest sea port to Dún da Lethglas (now Downpatrick), which was the seat of the Dál Fiatach who also ruled in Emain Macha over the Ulaid.

St. Dichu was the son of an Ulster chieftain, and the first convert of St. Patrick in Ireland. Born in the last decade of the fourth century, he succeeded to the petty kingdom of Lecale, which included Saul, in the present County Down. On St. Patrick's arrival at Tubber Slain ( the estuary of the Slaney near Loch Cuan or Strangford Lough), Dichu, then a pagan, strongly opposed his landing, and even attacked the saint, but was miraculously touched with Divine grace and embraced the Faith of Christ. Thereupon Dichu, after baptism, presented St. Patrick with the Sabhall (Saul), for a church, and thus Saul became the first Irish foundation of the national apostle, being afterwards known as Sabhall-Padhraic. Saul was a particular favorite with St. Patrick, and he frequently sought a resting-place there during his arduous missionary labors. St. Dichu, from the day of his conversion, was a model of sanctity and, from a man of warlike proclivities, became a man of peace. The details of his later career are obscure, but we know that two of his sons, who had been detained as hostages by Laoghaire, King of Ireland, were released at the prayer of St. Patrick. His feast is noted in the "Martyrology of Donegal" as "Diochu of Sabhall", under date of 29 April. As is well known, it was at Saul that St. Patrick died, and this monastery became in afterdays a famous abbey, under the rule of the Regular Canons of St. Augustine.

The Cruithin in west Down, seperated Dún da Lethglas from Emain, so the Dál Fiatach went south to Bregha and lost their ancestral home to the Cruithin. They needed to re-take all of east Down, but Dún da Lethglas was first. Afte the death of Muiredaig Muinderg, his son Eochaid did that around 497 AD.

The Mound of Down is the old hill fort from the time of the Dál Fiatach first constructed as a defensive and habitation site early in the first century AD. Until 1957 the high tides of Strangford Lough often made an island of the Mound (see image). It features in the Táin Bó Cúailnge as Ráth Cealtchair - the Rath of the hero Cealtchair mac Uitheachair.

Rath Keltaire or the Mound of Down

Diagram Rath Keltaire or the Mound of Down 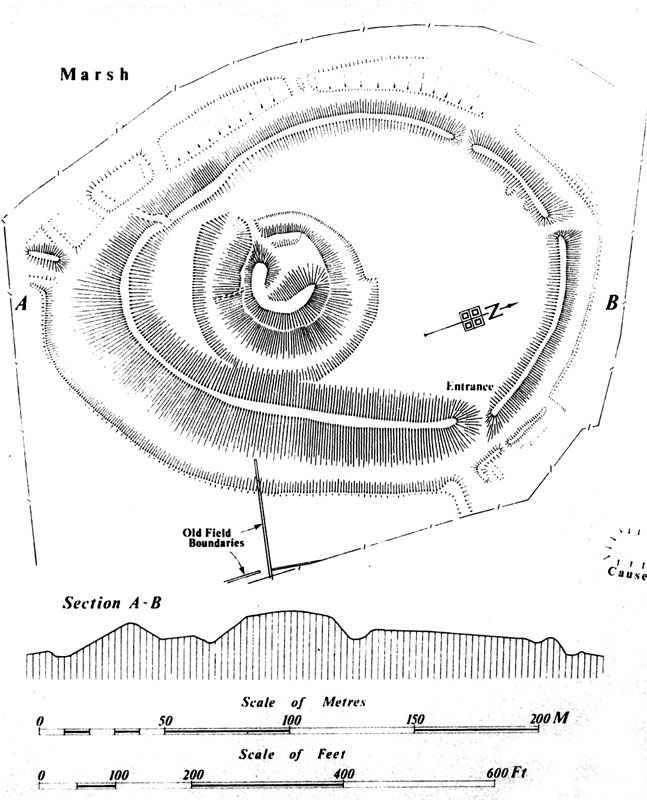 Artists rendition of Rath Keltaire or the Mound of Down 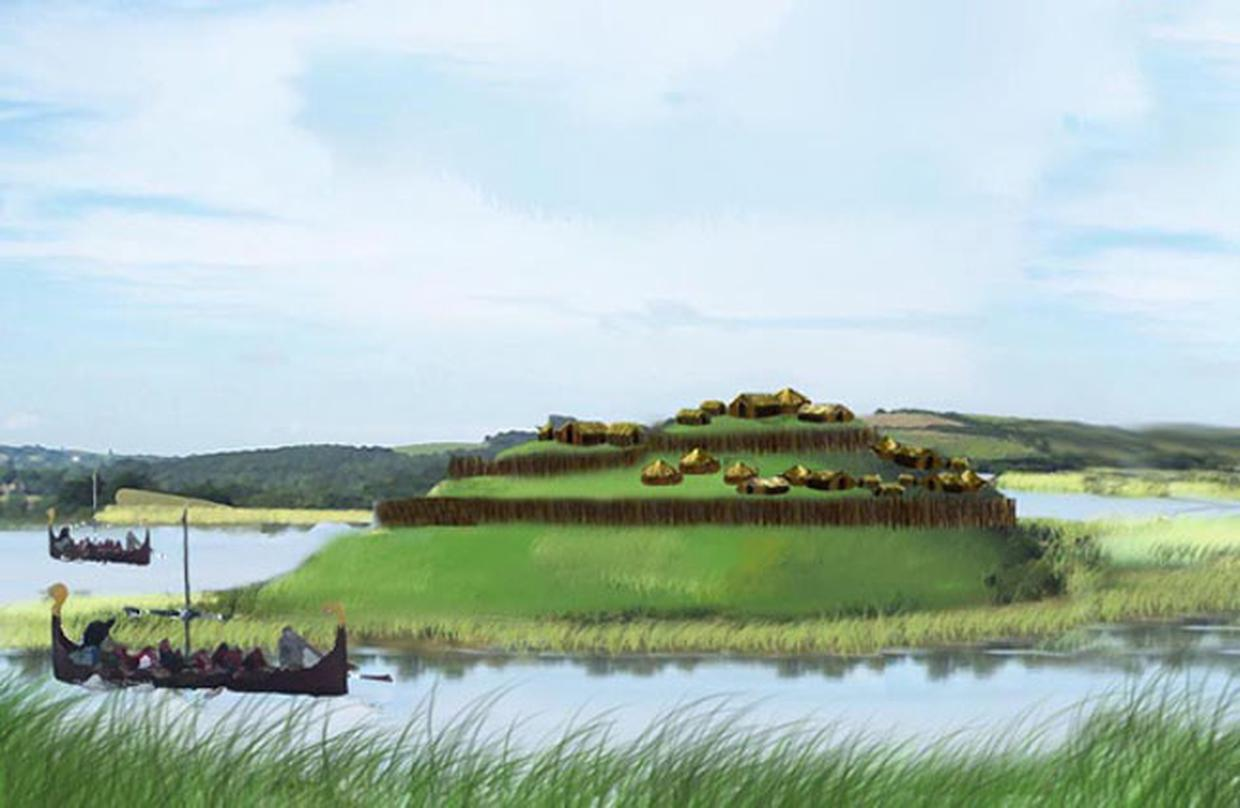 Eochaid mac Muiredaig Muinderg (died 509) was a king of Ulaid from the Dal Fiatach. He was the son of Muiredach Muinderg mac Forggo. His father Muiredach was the first historical king. His death date is given in the Annals of Tigernach in 509. This annal gives him a reign of 489-509.

In 496/498 the annals record the storming of Dún Lethglaise (Downpatrick, modern County Down) which may be connected with the rise of Dál Fiatach in this area which was to become their power base.