"Hy-Blathmaic, in which Bangor was situate"

Margaret Dobbs: The Bodleian Annals (Tigernach) have an entry : "death of Muredach Muinderg. Eochaid his son, King of Ulad." This is equated with the famous battle of Cell Osnad fought in 489 A.D. Muredach left five sons, "who divided their inheritance in Druimne Breag." ... The descendants of another son are located at Ard Mic Naisci, i.e. Holywood. Cairill succeeded his brother Eochaid as King. The subsequent royal line traced their descent from him. A chronological tract says he was "one of those present at the death of Patrick as books and sages say."

Rev, James O'laverty: The ruined church of Holywood occupies the site of a very early ecclesiastical structure, which was built by, or at least presided over by St. Laisren, whose festival was kept on the 25th of October. The Felire of Aengus the Culdee, who died A.D. 819, treating of the saints whose festivals occur on that day, says :-" Laisren the Great, son of Nasca, i.e., Laisren, son of Nasca of Ard-mac-nasca, on the shore of Lough Laig, in Ultonia." Of St. Laisren little is known; Colgan supposes that he is the St. Laisren, son of Nasca, who with his brothers, St. Gobban and St. Graphan, were placed in a monastery, which St. Carthagh, of Lismore, erected in Inispict, now called Spike Island, Co. Cork. St. Carthagh studied under St, Comgall in Bangor; and it is likely, that the sons of Nasca, having formed his acquaintance in Bangor, accompanied him on his return to Munster. They studied under his spiritual care in the great monastery which he erected in Rathyne, Co. Westmeath; and they afterwards formed three of the twelve monks, whom he placed in the monastery erected by him on Spike Island about the year 620. Gobban seems to have been bishop of that monastery, and his festival was observed there on the 17th of March, We cannot ascertain the date of St. Laisren's return to Ulster, or of his taking charge of the monastery of Holywood, but we find him mentioned as one of the Irish ecclesiastics, to whom the Roman clergy addressed a letter in the year 642. The primate and the chief clergy of the North of Ireland, addressed to Pope Severinus, in the year 640, a letter, in which they besought his decision regarding the proper mode of calculating Easter, about which there was then a great controversy raging throughout this part of Ireland.The Pope died before their letter reached Rome, but it was answered by the Roman clergy in a letter, which is preserved in Venerable Bede's History of the Anglo-Saxon. Church. The reply of the Roman clergy makes known to us the names of those who solicited the decision of Rome. It is addressed-" To the most beloved and holy Thomian, Columban, Cronan, Dimma, and Baithan, bishops ; to Cronan, Ernian, Laistran, Scallan, and Segienus, priests; to Saran, and other Irish doctors and abbots." Thomian was primate, he died in 660. Columban was bishop of Clonard, he died in 652. Cronan was bishop of Nendrum or Mahee Island, in Strangford Lough, and in all probability was bishop of the diocese of Down, he died in 642. Dimma was bishop of Connor, he died in 658. Cronan was abbot of Moville, near Newtownards, he died 650. Ernian was abbot of Torey Island, he flourished about 650, Laistran is intended for Laiseran of Ardmacnasca, or Holywood, the mistake is caused by the similarity of the letters T and E in ancient manuscripts. Scallan was abbot of Bangor, he died in 662. Segienus was abbot of lona from 623 to 652. Saran died in 661...

The ancient gloss on the text of Aengus - Laisren, son of Nasca, of Ard-mac-Rasca, on the banks of Lough Laigh, in Ultonia- describes very accurately the site of the ancient church of Holywood, the ruins of which stand in the vicinity of the large funereal mound, which is now in the pleasure grounds of Mr. Read, of Holywood. That mound was certainly the Ard - mac - Nasca-the height, or mound of the son of Nasca-and received its name from St. Laiseran, the son of Nasca. Our readers will readily understand that the sepulchral mound was named the Mound (Ard) of the son of Nasca, merely because it stood in the grounds adjacent to his church. It belongs, however, to a period long antecedent to the time of St. Laiseran, and was erected to cover the remains of some mighty chief, whose tomb, being the recognised place for the religious and deliberative assemblies of the neighbourhood, became the most important place in the district; and some spot adjacent would consequently be selected as site of the Christian church. It is on this account that we find churches near the great sepulchral mounds of Dundonald, Ballyrichard, Donaghadee, Holywood, Ballymaghan, the Knock, and every other great sepulchral mound in the diocese of Down.

The church of Holywood stood, a few perches to the north of the mound, on the banks of Lough Laoigh exactly as described in the ancient gloss. We have no account of any of the successors of St. Laiseran, but the church must have been held in high estimation for its sanctity, since the adjoining townland, which was called Ballyderry (the town of the wood), was named as early as the period of the English Invasion,-Sanctus-Boscus or Holy Wood,-from its proximity to the church.

A page from O'Laverty about Ard-mac-nasca

A page from O'Laverty about Ard-mac-nasca 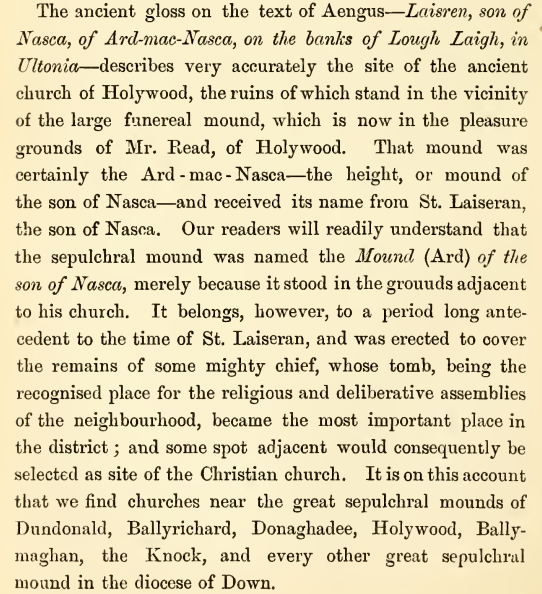 A page from Reeves about Ard-mac-nasca 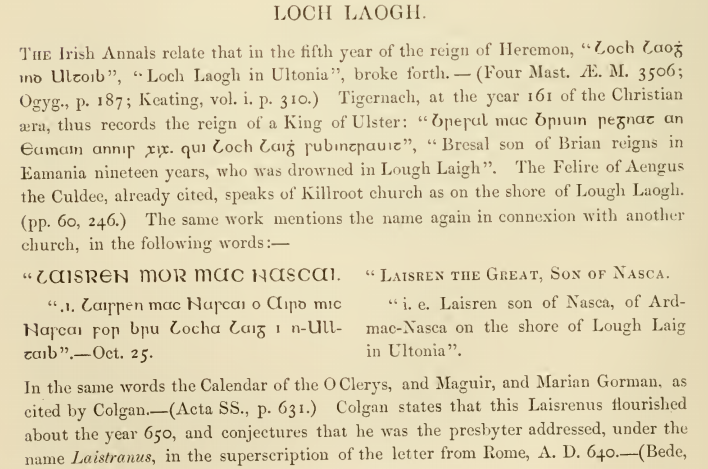 His father was slain by Blathmac's cousin Congal Cennfota mac Dúnchada (died 674) in 647. The Irish annals mention Blathmac's death as king prior to Congal's with that title so it can be assumed that Blathmac acquired the title despite Congal's killing of his father.

In 668 the Battle of Fertas (near Belfast) was fought between the Ulaid (Dál Fiatach) and the Cruithne (or Dál nAraide) and Cathussach mac Luirgéne, their king, was defeated and slain.