"Ochtari was their fort on the ridges of Breagh"

The story of the Journey North of the the Dál Fiatach begins with three Righ Uladh. The first was Muiredach Muinderg (died 489) who was was a king of Uladh from the Dál Fiatach. He was the son of Forggo mac Dalláin and his sobriquet means red-necked. The other two were his sons Eochaid (died 509) and Cairell (died 532).

After the fall Emain Macha to the likely nine tribes of the Airgíalla around 450 AD, the Dál Fiatach were driven out. The Airgíalla occupied the present Armagh, Monaghan, and Fermanagh, so the west was cut off. To the north was Loch Neagh and to the east were the hostile Cruithin. So Muiredach and the Dál Fiatach went south, down through Na Doirse 'The Gates' of Emain Macha, called the Dorsey near Sleieve Gullion. After passing Dorsey, they were in the 'Plain of Muirtheimne' in north Louth and sought the ridges of Breagha in south Louth for safety.

This was Dál Fiatach land. The Dál Fiatach ruled in Louth during the third century. Aednghusa finn (262) and his father Ferghusa duibhdhetaigh (226) (who were ancestors of Muiredach), fought the Connaght men there for Tara. The text below is about the Dál Fiatach fighting Cormac mas Airt for the rights to Tara. Cormac was the grandson of Conn of the Hundred Battles of the Connaght men. They took the name Dál Cuinn after Conn.

"Cormac was king of Eire till the might of Ulad came against him and banished him into Connaught... after the feast they gave Cormac in Northern Magh Bregh when a gillie singed his beard with a candle. There were three sons of Imchad of Dál Fiatach viz. Fergus Dubhdetach etc. Cormac went to Tadg m. Cein to help him to fight the Ulaid... The army went to Brug-mic-ind-oc (i.e. Newgrange) ... to Crinna at the head of the meeting of the rivers. Tadg defeated the Ulaid seven times on that day till he reached Glais Nera beside Druim Inasclaind (Dromiskin near Castle Bellingham)."
---"Bodleian Annals"
If the Dál Fiatach gave Cormac a feast it would be in their own territory. Northern Magh Bregh is the plain south of the Boyne. When Cormac attacks, he finds them close to Newgrange. When defeated they fall back to Castle Bellingham
---"Margaret Dobbs on the above"

Monasterboice Monestary was founded at this time near Collon. The name is a part-anglicization of the Irish name Mainistir Bhuithe meaning "monastery of Buithe". The monastic settlement was founded in the late 5th century by Saint Buithe (or Buite) who died around 521.

Map of the ridges of Breagh with Collon and Monasterboice 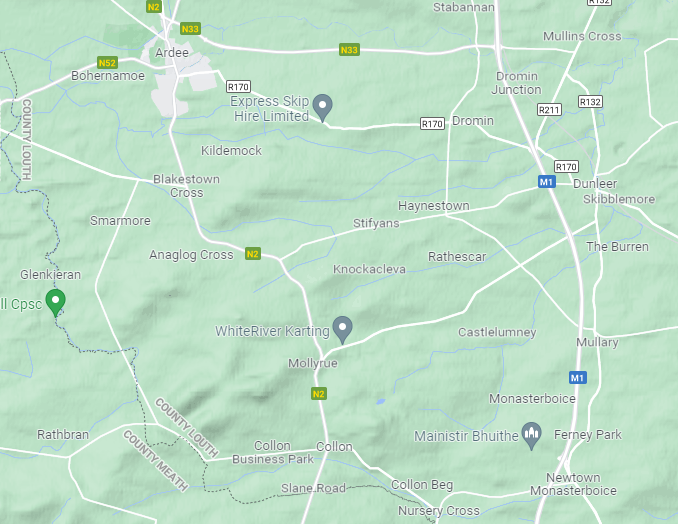 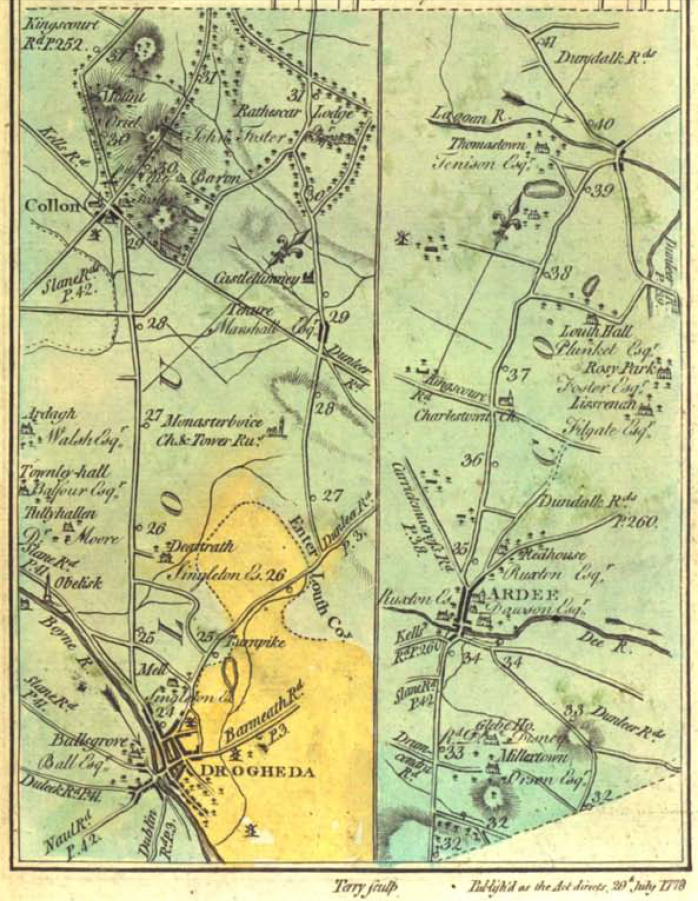 His death date is given in the Annals of Tigernach in 489 The Book of Leinster gives him a reign of 24 years giving a possible reign of 465-489. Nothing is recorded of him in the annals other than his death date.

In the period following the destruction of Emain Macha after 450, Ulidia underwent a recuperation in which the Dál Fiatach emerge as the overlords and Muiredach as the first historical king. Mac Niocaill, pg.73.

According to the Dál Fiatach genealogies, he received the blessing of Saint Patrick. The early seat of power of this dynasty appears to have been in County Louth at Óchtar Cuillche (Colland) at Collon, south of Ardee, County Louth and his descendants are said to have split up their inheritance here in the early 6th century. Ó Cr´inín, pg.219’; Laud Cf. LL. 330 c, BB. 165 a.

O'Hart says he was the first Christian king of Ulidia.

Mac Fhirbisigh: ninth in descent from Fiatach Finn, after a reign of twenty-eight years, died a natural death A. D. 479.