The Tithe War in Ireland 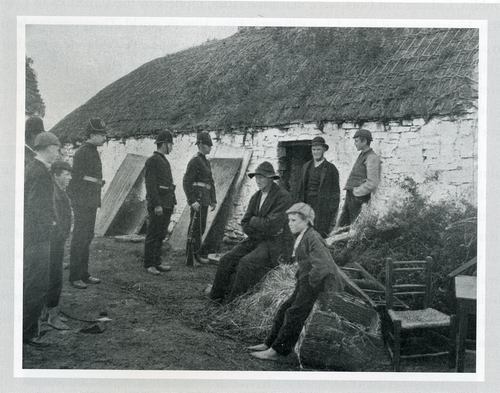 James Hoy left County Louth for America in 1830, just as the Tithe War was beginning. His Naturalization Papers indicate that he was bound for Phillipsburg, New Jersey, which is just across the Delaware River from Easton, Pennsylvania, but he stopped in Newark NJ for 15 years first. His believed home was a tiny townland called Newragh which had only 3 families living there in 1800. The next date when we know of habitation was 1850 when 3 other families lived there and one of which still lives there. We must think that James was forced to emigrate because his family lost their home due to the War.

The Tithe War in Ireland lasted from 1831 to 1836 and refers to a series of periodic skirmishes and violent incidents connected to resistance to the obligation of Catholics in Ireland to pay tithes for the upkeep of the Church of Ireland which was the Protestant denomination supported by the English Government.

Background
The payment of tithes was an obligation on those working the land to pay an annual tithe of 10% of the value of certain types of agricultural produce for the upkeep of the church. On the introduction of the Penal Laws from the 1600s, these payments went to the Anglican Church of Ireland, despite the fact that the vast majority of the population were Roman Catholic. Despite Daniel O’Connell’s achievement of having most remaining Penal Laws repealed in 1829, the obligation to pay tithes remained. His work was known as ‘Catholic Emancipation’. More often than not, tithes were collected in the form of goods, especially livestock, as opposed to payment of monies, as little cash was available in the countryside.

But the Composition Act of 1823 made it impossible to pay them in kind anymore instead of money. From the time of the Composition Act tithes were supposed to be paid in cash, and Tithe surveys were carried out in each Parish to assess what the income for that parish would be. Two people were appointed by each parish to carry out this assessment.

There had been a campaign of largely peaceful resistance to collection since 1829 and it soon had a financial effect on the Anglican Clergy, who began in 1831 to record lists of defaulters. These lists of ‘Tithe Defaulters’ identified almost 30,000 individuals. The lists were passed on to the Irish Constabulary, which had been established in 1822 to take over the functions of the militia. 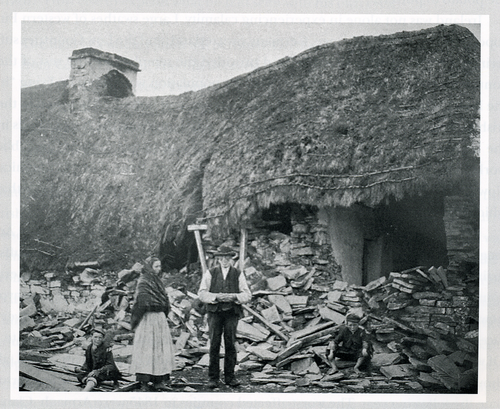 After the RIC destroyed a home

They were given the name 'Royal Irish Constabulary' by the English queen in 1867 for their work against their own people. They were smashed by the IRA in 1919 and the 'Black & Tans', who were ex-British Army soldiers from WW I were brought into Ireland to replace them.

The War 1831-36
The first clash of the Tithe war took place on 3 March 1831 in Graiguenamanagh, county Kilkenny when a force of 120 armed RIC forcibly took possession of cattle belonging to a Roman Catholic priest, in lieu of Tithes. He had, with the approval of his bishop, organized people to resist Tithe collection; his example soon spread, and shortly afterwards, in Bunclody, county Wexford, a crowd resisting the seizure of cattle was fired upon by the Royal Irish Constabulary, resulting in twelve deaths and twenty fatally wounded.

This massacre caused people to organize their resistance with agreed signals such as warning the community of the approach of police by the ringing of chapel bells. Such a warning resulted on 14 December 1831 in an ambush of a detachment of 40 police at Carrickshock in County Kilkenny; they were routed by the forewarned inhabitants and had 19 of their number killed, including their Chief Constable.

The British Government poured troops into the country, fearing a repeat of the 1798 uprising. The war came to a head in 1835 with the Rathcormac massacre, County Cork, when military and police killed 17 and wounded some 30 more in an attempt to collect a tithe of 40 shillings from a widow. 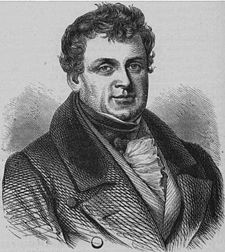 Outcome
The British Government was alarmed by several aspects of this massacre: by the fact that the order to fire was given by a Clergyman, by the pittance involved in relation to the bloodshed, and by the fact that the people had withstood several volleys and at least one charge by the troops without breaking. Finding the task of collection and the associated outrages an increasing strain, collections were suspended and a Tithes Commutation Act was introduced in 1839, which reduced the amount payable by about a quarter and made the remainder payable to landlords who would in turn, pass payment onto the Clergy. Tithes were effectively added to a tenant's rent payment. This partial relief and elimination of confrontational manner of collection ended the uprising, but Catholics were still required to pay towards the upkeep of the Church of Ireland until its final disestablishment in 1869.