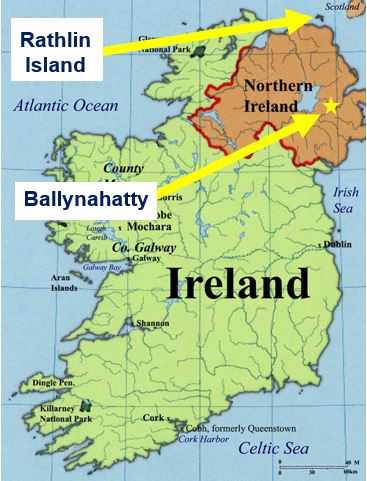 The Genetic Genealogy of the peoples of Ireland and Great Britain had been the same from the end of the last Ice Age until the Anglo-Saxon period. Even today, 'The People of the British Isles' DNA study found Anglo-Saxon DNA generally in the southeast half of England with a maximum of 38% in the far southeast nearest the Continent. Recent DNA work has shown that there were three waves of migration into western Europe after the last Ice Age. There were people from the earlier time called the Paleolithic (Old Stone Age), but the ice cut their record off from us.

The waves began as the ice receded throughout Europe and the first wave into the Isles began around 8,000 BC. (There are remains of a hut from about 7000 BC at Mount Sandel, County Derry.) Mount Sandel, a Mesolithic Campsite. These Mesolithic (Middle Stone Age) people are called Hunter Gatherers and were not yet settled in a single permanent place. It was Western Hunter Gatherers (WHG) who made their way to Mount Sandel. (There are different labels for various related HG group across Eurasia.)

The Genetic Genealogy of the Hoy Family 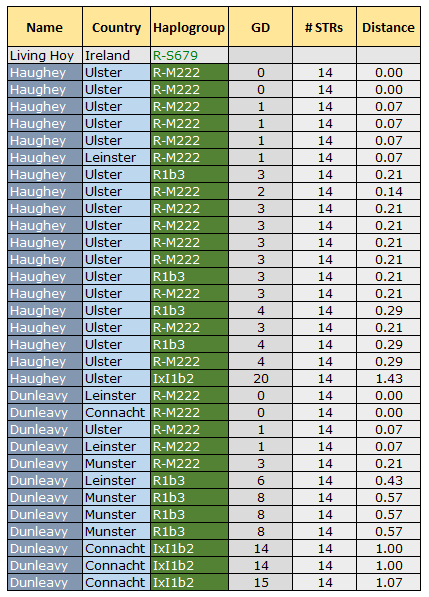 In recent years, the new science of Genetic Genealogy has been developed which applies DNA analysis to Genealogy. It uses three types of DNA from a human cell. These are the following:

yDNA measures the changes between parts of the Y-chromosome and how it affects people's descendants. The Y-chromosome is unique to the male line, as are surnames.

There are two kinds of analysis called STR and SNP.

STR was the first developed and the less accurate. The changes occur very often which leads to a lot of uncertainty. An early STR analysis from 2006 is shown in the graphic here.

SNP was developed later and is much more definite. The changes seldom occur and are very rarely repeated. This is not useful for finding cousins (as of now) but is very useful in tracking the movements of peoples and tribes going back hundreds or thousands of years.

The first work that was important for Irish Genetic Genealogy was done in 2005/2006 by Brian McEvoy of Trinity College Dublin. He used STR data from a sample of a few hundred surnames drawn from the phonebook throughout Ireland. Among the names were Haughey and Dunleavy. Haughey can be a phonetic rendition of Ó hEochaidh. The 1659 spelling of O'Hoy in Pendar's work was from an English viewpoint. In Ireland, Hoy is now Hoey and pronounced closer to Haughey. The last five kings of the Dál Fiatach were brothers who changed their surname from Hoey to MacDunleavy after Dunleavy Ó hEochaidh who was a king who died in 1091. After the Normans drove the Dál Fiatach out of County Down, the MacDunleavy were known to have become the hereditary physicians to the Cenél Chonaill in southwest Tir Chonaill (Donegal) near their base in Donegal Town.

From Griffith's Valuation from 1856 in Donegal, we find the almost all Haughey clustered in far southwest Donegal near Glencolumbkille and the MacDunleavy in the same area. The graphic above is taken from McEvoy's work for the Haighey/MacDunleavy and compares a living Hoy at the top with McEvoy's results. He identified several markers called haplotypes among the STR data. Among them were R1b, M222 (subgroup of the former), and 'I' which is likely pre-Bell-Beaker and associated with a subgroup of the Uladh and the Maginness and McCartan lines in west County Down. We can see the closeness of the living Hoy with the M222 men.

This link will show the Hoy family connections to these Donegal men.

The Genetic Genealogy of the Hoy Family